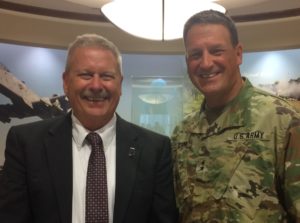 Kuker says the meeting marked the first time that four generals were in the same room.

Major General Carr reviewed the mission of the Indiana National Guard and its strategic lines of effort.

Mr. Kuker was honored to receive a Challenge Coin from the General and be able to speak to the group about Hancock County and how both can work together.

“The Indiana National Guard has assets that are of use for private companies,” Kuker says.

Let us put our resources to work for you. Call us at 317.477.7241 or e-mail executive director Nolan “Skip” Kuker today. Like Hancock EDC on Facebook to keep up with the latest information.